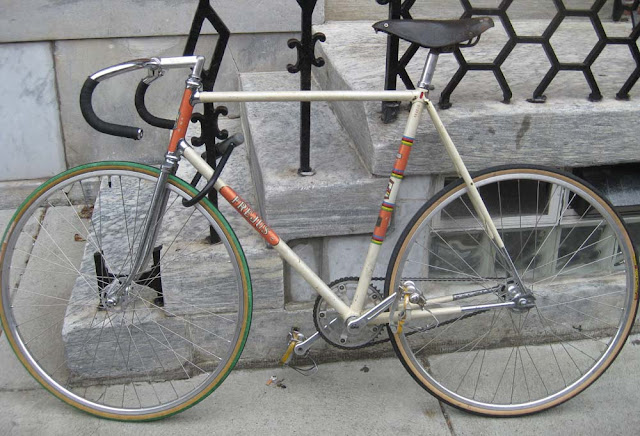 This bike is kind of an enigma. It is obvious an early 1960s Frejus track bike, but it is not as tight of a geometry as other Italian track bikes of the time. It has longer chainstays, and more relaxed angles. It reminds me of a British path bicycles, a single speed bike that would be used on club rides. The current owner was told that maybe it was used on road rides, rather than soley in the velodrome. I never heard of Italian bike builders doing this, new to me. I know of French single speed bikes, intended for training and club riding. any help? 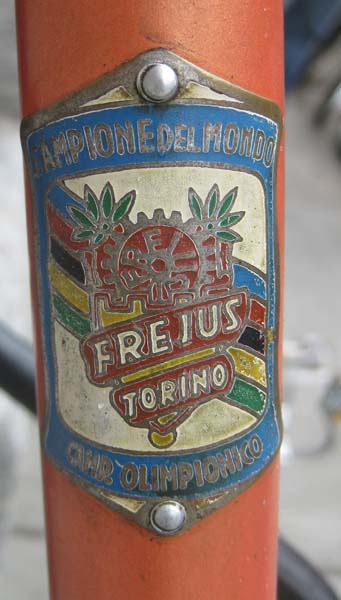 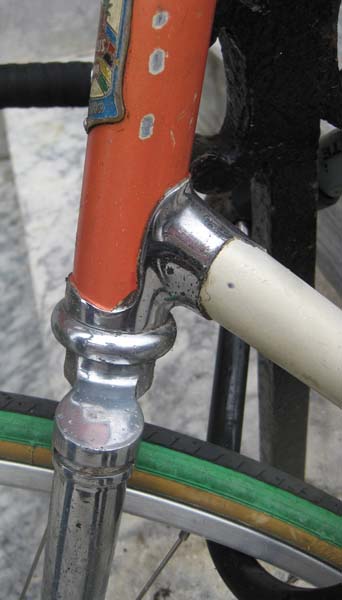 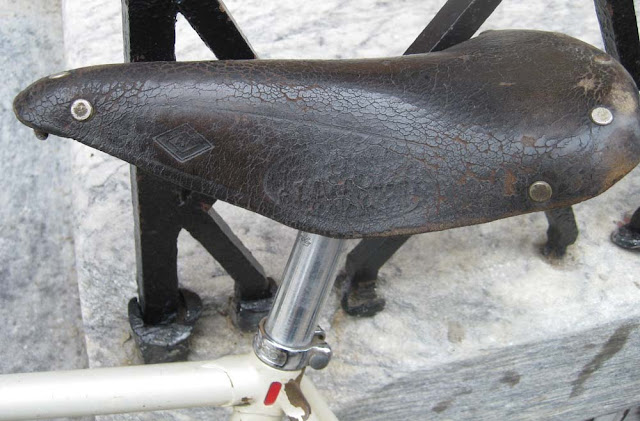 addendum- here is a email I received from a reader who owned a very similar bicycle-
"Regarding that Frejus track/path bike: I had one just like
it, same equipment except that it had inch pitch. Bought it
used in 1967 from Oscar Wastyn's shop in Chicago for $125.
My understanding was that it was about 4 years old at the
time, and it had suffered some damage in a crash which Oscar
corrected, then it was repainted in metallic red but still had the chrome fork. Oscar called it a path racer, and I
used it for lots of riding around flat Chicago. In San Diego I trained with it at the velodrome and used it for
short time trials, but when I moved to my present very hilly
area, I could not use it and sold it to Mike Kone when we
were at a CyclArt Concours d'Elegance. Oh, I used it with
a Weinmann short reach caliper on the front, but had to
file down the thread a bit on the posts to allow the pads
to contact the rim properly. The one you photographed is
made of Reynolds tubing, but mine was Columbus with .9 to
.6 mm butted tubs. It was a great bike!!
Preston"
Posted by bikeville at 7:48 AM

I cannot help with the Frejus, but I can offer a note on taxonomy. In British cycling parlance of the classic era, a path bike was strictly for the track, or "path," as it often was called, especially in early years. The frames built to run on fixed wheel over the roads, usually with mudguards, as well as on the path/track are "road-path." The misnomer of calling these latter bikes "path" bikes, or "path racers," is an invention of Americans on the CR and the BOB lists.

You have an excellent blog. Keep up the good work!

thanks for the input, I have been using the "path" term incorrectly for years. I just assumed "path" was the same here in the US that described a trail or road, not a "track."

crazy CRers, but it could be a common error due to regional definations.

Your "Peaches and Cream" Frejus, as they are known in NYC, was imported by Tom Avenia in Manhattan. The bikes were of "Pursuit" geometry, not sprint style. Therefore, more relaxed geometry. Also seems like every bike that came through Avenia was drilled for a front brake! The Frejus Co. was headquartered in Torino, Italy in Piazza Statuto. I spend a lot of time in Torino.