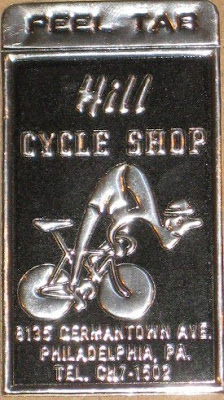 Hill Cycle Shop was the premier bicycle shop in the Philadelphia area for many decades.
Here is the Facebook dedicated to Hill Cycle Shop.


John Eustice(2 time US Pro Champion) speaking about his youth and riding -
"I grew up near Philadelphia and there was a wonderful bike shop, Hill Cycle Shop, one of a handful of legendary bike shops that keep the tradition of professional cycling alive. [Hill Cycle was founded in 1929 by the Casale family, –ed.] There were a few in New York , too: Stuyvesant's, which is now “A” bicycles[A Bicycle Shop], Thomas Avenia in East Harlem, and later, Kissena. There was Princeton Kopps Cycle too, and together they were the East Coast establishment that kept the flame burning for American cycling. The shops were beautiful, full of Campagnolos and Masis, Pinarellos and Colnagos, and beautiful hand-made Vittore Gianni wool jerseys—Eddy Merckx used to get Gianni to make his jerseys. Hill Cycle Shop was an incredible jewel box of a bike shop and a very stimulating place for a boy interested in cycling." - from the article - John Eustice, Looking backward and forward


We have the Hill Cycle show bike, we are currently restoring it and it will hang downstairs as a reminder of Philadelphia's Bicycle racing history. I will add photos of it in the future as well.
Posted by bikeville at 9:08 AM

In the early seventies--maybe '71 or '72--I went to a crit in Ardmore's Suburban Square shopping center. It was the first bike race I ever saw. I was hooked from then on, though I didn't pickup racing myself. That day I met a few kids my age racing on gorgeous Masis and Cinellis. I think they were members of the Philadelphia Bicycle Club. I remember meeting an older guy too--it's driving me crazy that I can't remember his name but he was a scion of a well known Chestnut Hill family. I think they all hung out at Hill Cycles (the minute I saw your post I flashed to the memories I had of that crit, so that must be an association I've had for a long time)

@Anonymous 2010, the club was the Pensylvania Bicycle Club whose major sponsor was Hill Cycle shop of Chestnut Hill and the name of the guy was Jerry Casale (jr).