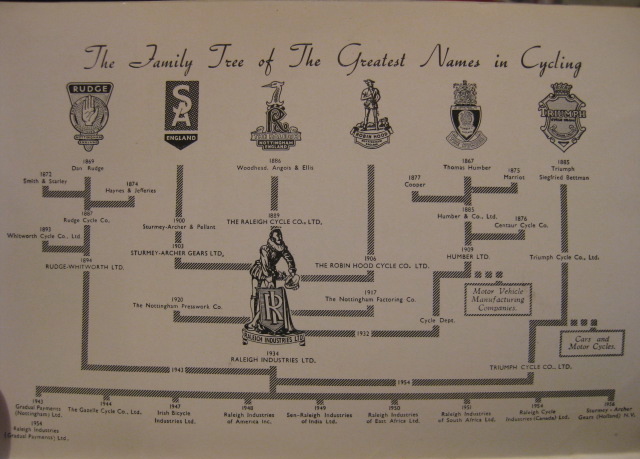 I recently found this illustration a publication Raleigh put out in the 1950s. It illustrates how Raleigh Industries owned most of the manufacturers of British built bikes that were imported in the United States, and as much as one might have thought it was cool to have a Rudge or Triumph rather than a Raleigh, they were all owned by Raleigh Industries.

Rudge was acquired during wartime in 1943. Robin Hood was in 1906, Humber was 1932 and Triumph was 1954, and after this publication, they also bought Hercules, Carlton, and a couple more names. (ED. BSA and Sunbeam were also acquired in the late 1950s). It was forward thinking of Raleigh to acquire the manufacturer of one of their main parts, the internal geared hub, early on. Sturmey Archer became part of Raleigh Cycle Co. in 1903, a partnership that proved a perfect match, as the internal 3 speed is forever linked to British bikes that Americans dubbed- English Racers, compared to the cumbersome Schwinn balloon tire bikes.
Posted by bikeville at 12:31 PM

I believe that also acquired BSA (that also owned Sunbeam at the time) in 1957.

thanks! I totally forgot about BSA, and Sunbeam.