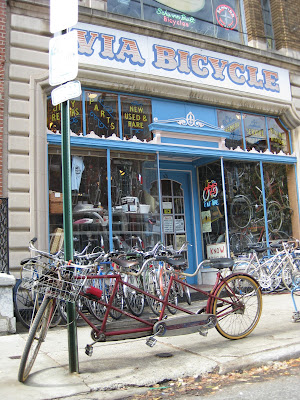 We restored this 1949(ed.) Schwinn triple seater. It looked great in front of the bike shop.
I should add, this 3 seater uses all the same components as the Schwinn 2 seater Town and Country. British made cottered cranks and bottom brackets, drum brake hubs, 26 x 1 1/2"(650b) wheels and 1 1/4" headset. We do carry spares if anyone is looking for parts. inquire.
Posted by Via Bicycle at 9:33 AM

does this bike have 650b wheels?

and thanks for sharing all of the great stuff on your blog as well.

thanks, I corrected.
how did you figure out the date?

Hey Guys, I have one of these as well. I found it after someone had it painted all white. I have often thought of restoring it and have taken pics of the 2 or 3 others I have seen so as to get the decal and pinstriping done right... Dont know if I will ever get to it. I have a modern triple I ride around and have ridden in local 4th-o-July parades. I do have NOS 26X 1& 1/2 Hurricane tires.
Cheers,
Matty

Curious how it was dated to 1949??
Mine is from 1957. I have seen several in person here in Southern California but nothing that early.
I used to also see the quads that
Schwinn made for Disneyland...they were later 1950's as well. Anaheim Schwinn serviced them.

I dated it to 1949 with the serial number and by talking to Richard Schwinn.

I have a Schwinn Triple Tandem as well, is theres a way to check serial numbers to date it. I've gone to every serial number site and nothing. Looks just like the red one in the pic, mine is green.

I, as well, have one of these rare bikes. My father bought it from Valley Cyclery in the San Fernando Valley (Sherman Way & Reseda Blvd.) back in the early sixties. It was my "commuter" bike; I would pick up a couple of my schoolmate friends (they were brothers) on the way up to our parochial school we attended together.

My older siblings rode the bike first. After the "grew" out of that stage, I found all these bikes in our garage; the Triple, being one of them.

It originally was white. I was so excited about the bike that my Dad had Valley Cyclery send the bike back to Schwinn in Chicago to have it repainted Blue.

I found this photo online of George Garner's Store in Reseda. I'm 99% sure that the bike is my Triple when it was white.

Hi, how do I contact you for parts? Thank you
Alwaysbelieve@gmail.com