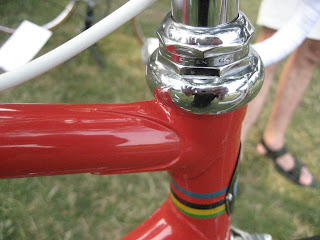 I was looking through my hard drive at some pictures from various shows and I ran across these three images. I did not take any pictures of the complete bike, just these three details of rare parts. Lots of restorations are close to being period correct, but it all comes down to the finishing touches. The bike(owned by Ken Denny) is a 1958 DeRosa, painted at some point recently. The headset installed is the first generation Campagnolo with the elusive spacer. It is in beautiful condition and compliments the restoration done to the frame. So often the parts don't don't seem to match the bike's restoration. 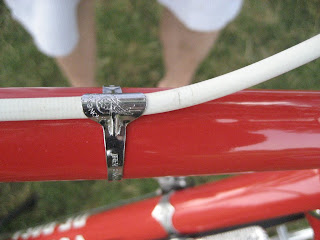 The brake cable clamps are even harder to locate. Ones in this condition are rarely ever seen. This is my major sticking point with mid to late 1950s Italian racing bikes. So many restorers/collectors miss this and assume that they are the same as the 1960s brake cable clamp, and dare I say. . . same as the 1970s one!

The small details are what judges look at. From a distance, this restored bike looks as good as the next one. 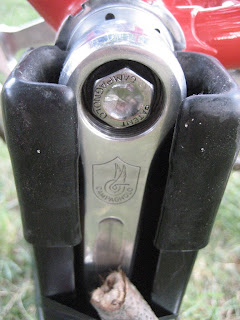 This last photo is the one that put it over the top. Not only did this bike have all the obvious pieces that I look at, the owner thoughtfully left the crank arm dustcap off so the discerning eye could see that it even has the correct first version Campagnolo crank bolts. Now that is details and the condition is excellent, to boot!

One might say that I am too harsh of a critic when it comes to restorations, and that I might take the love out of the hobby but I can argue that if one is trying to recreate something to it's original condition, then their should be guidelines, points of reference. Excluding the obvious blunders incorrect paint color or the mixing of modern and vintage parts, judging a proper restoration really comes down to the owner doing their homework and focusing on the details.
Posted by bikeville at 11:20 AM

i would argue the details is where the real fun begins, otherwise its superficial logo's in the most noticeable places

wouldn't the fun be riding the finished bike? I kid, I kid. I love the challenge of locating the parts.I mean, who rides bikes anyway ;)

Yes, details are important, but you made a serious flaw in your observation, Joel. The bike is a De Rosa, circa 1958.

Ken, corrected that. I did not publish your name as there has been certain owners of bicycles who did NOT want their ownership published for whatever reason. so I took the stance of not publishing them.