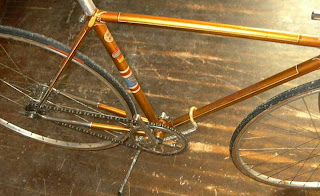 I know I have already talked about Schwinn Paramounts on the blog before but for some reason, we really have an affinity for them here. They were the pinnacle, or paramount(ha!), of an American made assessable bikes. Sure there were other high quality American frame builders- Brennan, Drysdale, and others, but they were much harder to buy and somewhat unknown outside a small elite circle. Many Americans were importing and racing on European lightweights. Schwinn really threw their hat in the ring coming out with the Paramount, on the heels of the Schwinn World. They imported on all top of the line parts and even used produced many parts themselves.

This Paramount is from the turning point with Schwinn. They had just recently started importing some derailleur gear stuff, releasing 5-10 speed derailleur geared Paramounts. This 1959 model is right around the cut off date when Schwinn was discontinuing their proprietary cranks, hubs and stems, for those made in Europe by Campagnolo and Cinelli, that would become ubiquitous on the racing circuit even to this very day. Campagnolo had been producing parts for about two decades at this point and had recently developed and produced their own line of cranks, seatpost, bottom bracket, headset, pedals, and hubs. Almost a full group, minus the brakes. With this, a Paramount could be outfitted with the latest Italian components from front to back. 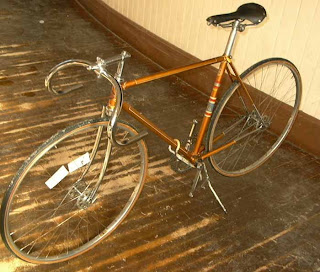 The 1959 track bike here is all strictly Schwinn produced or approved parts. The bike parts would have been the same as found on an earlier Paramount from the 1930s, minus a few minor details.

The frame shows progression from the earlier Paramounts as Schwinn started to import French Nervex Professional lugs, found on all the high end European lightweights. Also Schwinn's use of chrome reflects upon the European influences. Schwinn did not use Campagnolo dropouts on this bike, but I have seen road racing models from this time that did. 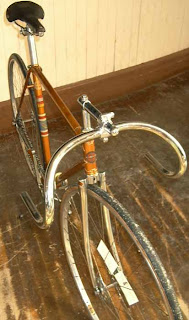 The bike has Schwinn Paramount hubs, bottom bracket, crankset, handlebars, adjustable stem, and capped off seatpost. The rims are made by Weinmann. The saddle is a Brooks b-17 swallow. The color of the bike is Radiant Coppertone, a translucent copper color sprayed over a silver undercoat.

This bike had very little use, if any when we got it, and we have only cleaned it up. It is a rare time capsule piece that shows an original finish, box-lined, Schwinn Paramount in it's glory.
Posted by bikeville at 8:58 AM

Simply stunning transitional Paramount, sporting the classic "Antique" seatmast decal that would be gone, what, 5-minutes later? Plus plenty of the "goodies" parts-wise. Thanks for sharing it (looking for a Brennan myself ... )

it is a shame that most of the rare bikes never get seen, they either reside in collector's attics or hidden from view in bike shop's like ours. I know of a couple Brennans that have come up "for sale" over the past few years, but never on the marketplace, they are usually traded amongst a select group of collectors.

I am going to make an effort to showcase some of the cool things we have here, or at least some of the things that I think are interesting.

It would be nice if Jeff Gorman would post some pics of his Brennans, since he's tried so hard to corner the market - at least I haven't been able to find any.

At some point I assume he will. There is such a limited market for publishing any kind of book of this interest and putting a collection online is scary to some people. I think people want to own the rights to the photos the take of their super cool bikes and don't want the images exploited???

The 6 day collectors seem to be more insular than the French Randonneur or Italian bike collectors. I know of the collectors, but they do not have a group, they are sort of at awash with the CRers, and too new for the Wheelmen. They are in limbo. There was the book and video put out a few years ago called the Jazz Age that was about Six Day racing, and I think most if not all the material was from Jeff's collection.

Wool Chamois and bikeville. Any idea what a Brennan goes for? I ask because I own a Pop Brennan. When I emailed Jeff Gorman he offered me $300-500 for the frame and fork. I am contemplating restoring the bike with wooden rims etc. It has original BSA skip tooth cranks, hubs,bottom bracket, headset and stem. I don't think the seat, hadlebars or rims are original but I just don't know for sure.

Thanks for any help you can provide. I love this bike but alas I don't have the space to care for a beautiful bike such as this. Thinking about fixing it up and reselling it to pay for our wedding.

I ended up with this bike out of pure luck. I saw it at the thrift shop in West Marin and bought it for 6 dollars. The woman said "it only has one gear and priced it at 6 dollars" Needless to say my wife to be was not happy when I brought home yet another bike.

Thanks in advance.
M

Bikeville will know better than me. But my impression is that the world of Brennan collectors is small but avid. Let's just say that a Pop Brennan is my "holy grail" of vintage bikes (and that's saying a great deal), and I'd be willing to pay considerably more than you've been offered previously. But maybe not as much as you'd be able to get by sprucing it up and listing it on ebay. Regardless, it does have considerable collector value - it's hard for me to pinpoint a market value because relatively few come up for sale, and the ones that do often change hands privately. If you're interested in discussing the bike, you can email me at edvintage63@aol.com. I can also put you in touch with another collector who will have a good idea of the value of the bike (as I'm sure can bikeville).

Sorry, that last post came up as anyonymous. I have trouble logging on sometimes. Oops.

Fabulous Paramount! I've had a couple of them (now sold) and plan on getting a few more. I'm currently restoring a Reynolds 853 Peloton mad by Match Cycles for Schwinn in the late '90s. They made a beautiful Paramount for Schwinn too. Those were made by Curt Goodrich who now builds frames for Rivendell and for his own label. He works out of Minneapolis now. The best Paramounts of course are those built at the Schwinn factory in Chicago like yours. The Waterford and Match Cycles Paramounts are still great bikes though. The Japanese Paramounts from the early '90s are decent frames with Tange tubing but they don't have a lot of value.

This is the exact bike that I rode to two junior state championships and also one senior half mile state championship. the years were 1959 and 1960 for the junior years and 1961 for my senior win. This was in Minnesota.

Thank you for this look into my past.

By the way the price then was $150
Mike Hanlin