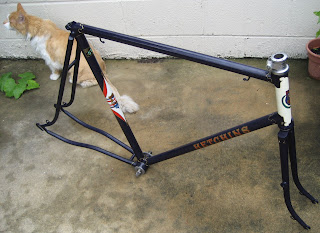 I picked up this Hetchins last year at the Cirque du Cyclisme auction. I kind of bought it on a whim, I mean it was a very good deal and it is a Brian Baylis repaint, but I am not one for repaints. I am scared to be the guy you wrecks a perfectly good paint job. I guess that is why I never buy new bikes(or it could be that I am cheap!)

It is a prewar model, if I remember correctly, it is a 1937-38, making it one of the earliest survivors. It is currently fitted with a Chater Lea headclip headset and Chater Lea bottom bracket. I think I am going to set it up as an internal geaar bike, with probably a Sturmey Archer TF rear hub. It takes 26 x 1 1/4" wheels(597mm bead seat diameter). I have a Chater Lea crankset for it and Dunlop special lightweight rims. I would love to use upright North Road style handlebars, but I know that would be incorrect. Will probably be some Reynolds alloy handlebars and stem.

It is such a beautiful paint job, I feel like I can't ride it, but I joked about putting it together to ride down to Cirque in Leesburg, VA this summer. I doubt I will, as I have so many projects ahead of this, and there is talk of riding down on a Bilenky tandem. That would be a lot of fun! I love distance riding and I can share with her the experience. Hopefully this year will not be 90+degrees out and a freak thunderstorm with mini tornados touching down in the area! 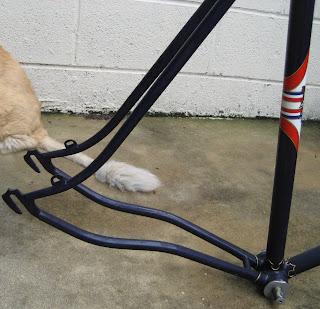 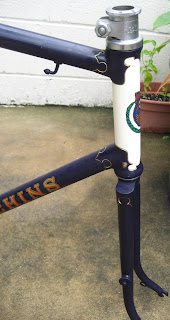 A rack of bicycles 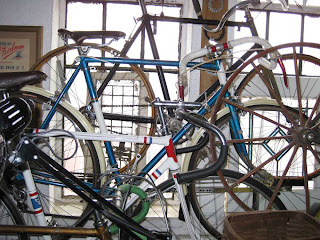 Here is a rack of cool bikes located in the bicycle museum, that no one ever gets to see. I just learned of their placement the other day. i knew we had the bikes, but i had no idea they were looking good up there. From the top to the bottom-

The top bike is kind of a mystery. It has an Alvin Drysdale (Pop Brennan Cycle shop)decal on it, but it isn't like any other. It has diamond shaped chainstays and other interesting frame particulars (not visible from the pictures). One thing I cannot recall ever seeing is a BSA cotterless crank set. that is new too me.

Third bike down is an early Schwinn Paramount. it is a repainted one with very clean original parts, no replating.

The final bike at the bottom is a Legnano outfitted with Campagnolo cambio corsa gear system. It is all original, other than the cloth handlebar tape. It has most of it parts stamped Legnano, including pedals, cranks and hubs. It is a rare bike, and it is awesome it was found in New Jersey of all places.

Also visible is a wooden rear wheel. it is from an 1890s bicycle, and thought to be of the Elliot Hickory style(not 100% sure if it is Elliot Hickory or not)
Click on pictures for better view. 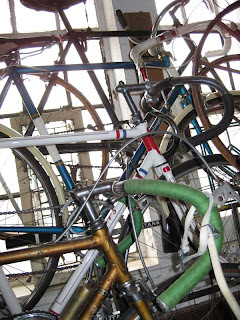 Posted by bikeville at 7:08 PM No comments: 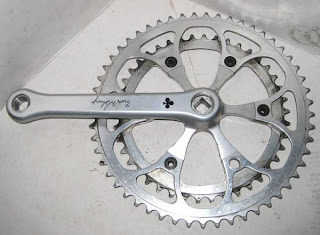 At the last swapmeet, we picked up this interesting crankset. Not only is it unique having 6 spider arms, instead of the usual 5, but it is also stamped with Ernesto Colnago's signature. It was produced in the early 1980s and was made by the Italian company Gipiemme. Colnago used a a 6 arm crank in the mid to late 1970s made by the Italian company Ambrosio. Just a weird little piece.
Posted by bikeville at 10:08 AM 1 comment: 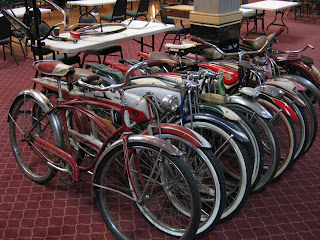 Well once again it has been a while since posting. no excuses other than all the ones I can make up right. . . .. . now!

Nope, none. well here is a photo or two from the last bicycle swap meet I went. It is a pile of vintage balloon tire bikes that Sam Fitzsimmons was trying to sell. Excellent pile of bikes, Schwinns, Shelby, Huffy, and others.

Here is a pair of Bowden Spacelanders. This are some of the rarest bikes built post war. i think there was around 500 or so built in 1960. This have sold for as much as $8000 many years ago. Funny seeing two, side by side. Just so you, they were made with really inexpensive parts, and were extremely heavy. 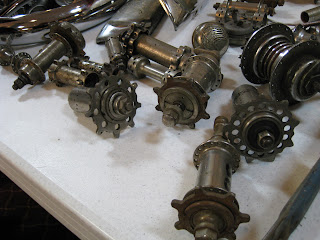 Here is an awesome table full of turn of the century hubs. Some take normal hook end spokes while others use straight ball-end spokes. One could see the adaptation of these 100 year old with the modern hubs found on modern ultra lightweight boutique wheels found by Mavic, Campagnolo, and Cane Creek.

The swap meet catered more to balloon tire and older bikes, but i did come across a few lightweight bits, including a rare Colnago crankset with 6 arms, rather than the usual 5 arm spider. Also came back to the shop with a handful of Campagnolo Nuovo record cranks, brakes, small bits, 20+ vintage cycling caps and even a couple spare Clement Seta sewup tires. Oh, almost forgot, I got a Harden rear high flange track hub (not a Bacon slicer) laced into a period sewup rim.

will post future swap meet booty as they are captured. Live vicariously through my life on the road.
Posted by bikeville at 8:51 PM 3 comments: