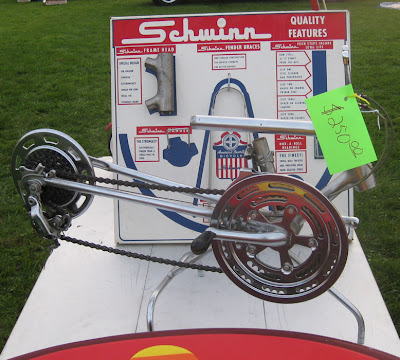 Back in the 1960s, there were a couple different gear demonstrator offered to bicycle shops to help educate customers how the 'new' derailleur gear bicycles worked. The Schwinn gear demonstrator was the most common one, like a mini bicycle, with feet that would sit on the a counter top, and a handle as a 'pedal.'

The Schwinn demonstrator was offered over a long enough period(estimating around 10 years) that collectors can find them with different era derailleurs and shifters. All the ones I have seen have been equipped with Huret gear(some labeled Sprint, but mostly "Schwinn Approved").

I have come across French ones in my travels as well, one Peugeot and one Gitane. They were both equipped with Simplex rather than Huret and Stronglight cottered cranks.

(the Schwinn gear demonstrator in the photo above was a 1970s one, with the large Schwinn stem shifters. The price tag of $250 is ambitious, as I usually see these selling for $100 or less. Behind it is a display showing the all the merits of the construction of a Schwinn bicycle, messing a couple bits.)
Posted by bikeville at 7:46 AM

Where Can I get one? I want one.

Can you email me if you find one? I would be willing to offer you something. I missed out on purchasing one recently.