funny, at one time this seat clamp sold for. . .

over $500! funny. Two overzealous bidders bid this up to astronomical prices on Ebay a couple years ago. This seatclamp was used on mid 1950s to mid 1960s Italian bicycles. It was found on ones that used this seat collar type, rather than seat binders built into the seat lug. Olmo, Atala, etc used this type- Bianchi, Legnano and Cinelli used their proprietary seat lugs.

The design was later simplified to a circular pattern, rather than the earlier, angular frieze like pattern.

It generally sells from $10-$60, depending on condition and demand. 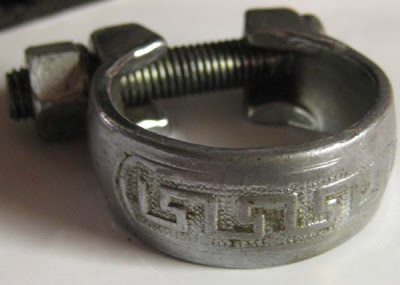 Posted by bikeville at 7:45 AM