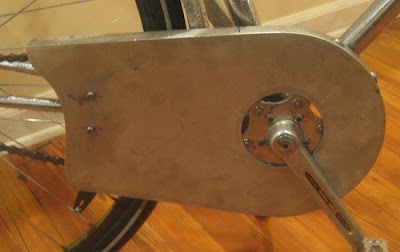 I decided after work to finally install the chainguard I got from Velo Orange a year or so ago. It was as difficult as I imagined. I was kind of limited to TA cranks with the small diameter of cutout(they have since made one that accepts more variety or cranks- with a larger hole). The original Porteur bicycles with steel cottered cranks were offset to allow for clearance so neither the crank arm or the chainring would rub against the guard. I created a "spacer" to move the position of the chainring over a little, away from the chainguard, out of a Lambert outer chainring. The mounting brackets were fabricated at Via Bicycle(I bought the chainguard without any hardware). After about 2 hours of work, I had it mounted and it did not rub, but it was a lot of measuring and was a bit of work to put it into the proper position so it would not rub. I noticed, after the final tightening, that the chainring is not center into the cutout hole. That sucks. But that is the position where it does not rub, so. . . where it will stay. 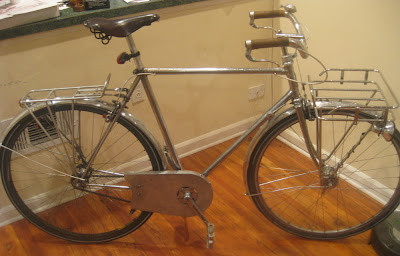 a chainguard mounted on a Bilenky Porteur owned by my friend Pat built by Bilenky Cycles. It is 9th Bilenky he has had built. the Pinstriping was done by Simon Firth at Bilenky Cycles, he is really coming into his own with it. (as you can see, some rubbing. I assume my might end up like this too. well I hope not). 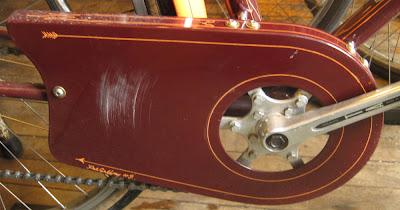 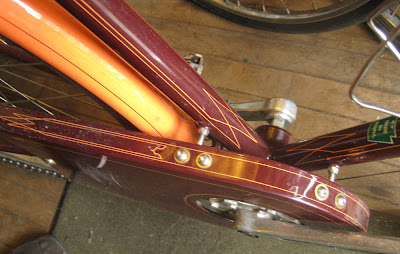 Posted by bikeville at 9:42 AM

Mount the chainring on the inboard side of the crankarm.

I thought about it, but decided against it for whatever reason. I was at work yesterday for 12 hours, and I guess I was not the clearest when I was working on this.

well all that said, 24 hours on now, and still no rubbing. so I guess it worked.

I suppose depending on BB you could have chainring/chain stay clearance issues. Good looking bike. That pinstripped steed has almost moved into the realm of art. I have a couple of fancy-dancy bikes, but I couldn't bring myself to ride that one.

Your own greeting card is simply stunning -- as well as such a beautiful present. Any kind of lady will be delighted to get this particular.
Many thanks for you personally motivation.